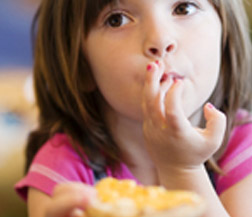 Einkorn, a hulled wheat, and its cousin, emmer, were the first types of wheat domesticated 10-12 millennia ago. It is up to 20% higher in protein content, but, like modern wheat, is limited in lysine, an essential amino acid. Einkorn has a similar overall nutrient profile, with higher levels of phosphorus, potassium, iron and magnesium compared to modern wheat. Einkorn contains more lutein, a yellow pigment that has been associated with eye health, giving bread and pasta made with einkorn a yellowish color. Einkorn is primarily of interest today as a specialty grain. It has potential to be used in the development of new highlutein wheat varieties.

Emmer is also a hulled wheat and is comparable to modern wheat in amount and nutritional quality of the protein. There is limited data on the micronutrients in emmer, but overall, the profile and content appears to be similar to modern wheat. An advantage for emmer is that it can be grown in difficult conditions, such as in poor soils and in hilly or mountainous areas.

To Germans, it is known as dinkel, Italians as farro and Americans as spelt. Whatever the name, spelt has been around since 7,000 BC and of the “ancient wheats” is the most widely available in the United States. Spelt is a subgroup of modern wheat. It is slightly higher in protein content, but similar in protein value. It is also higher in certain minerals, selenium, phosphorus and magnesium. The agronomic characteristics of spelt may make it more suitable for organic production compared to modern wheat. There are winter and spring varieties, as well as hard and soft types of spelt.

Nicknamed King Tut’s wheat, it was originally cultivated in the Fertile Crescent area which runs from Egypt to the Tigris-Euphrates valley. Kamut® is a modernday brand name of ancient khorasan wheat that has been registered by a family in Montana and is only grown organically. “Kamut” is an ancient Egyptian word meaning wheat. Kamut is a relative to durum and is naturally higher in sugar content giving it a sweeter, nutty flavor. It provides several key nutrients, including B vitamins, selenium and magnesium. It has a higher amount of protein but similar amino acid profile compared to hard red wheat. This wheat can be used as whole-kernels for pilafs or ground into refined or whole grain flour for use in breads, pasta and other grain-based foods.

Millet originated more than 4,000 years ago from a wild west African grass. Millet tolerates adverse growth conditions and serves as an important food source in many parts of the world. Millet encompasses a range of cereal species, but the four major types are proso, pearl, foxtail and finger millet. The seeds are small, round, and relatively soft with a mild flavor. Millet is naturally gluten free and blends well with other grains. Millet is used in a variety of products that are available in both mainstream supermarkets and specialty stores, including breads, breakfast cereals, cookies, crackers and side dishes.

Sorghum is one of the most important crops worldwide. It originated in Africa as early as 8,000 B.C. Sorghum is a versatile crop that can grow under adverse conditions in both temperate and tropical climates. It is used for food, feed and biofuels. Sorghum, which is commonly known as milo in the U.S., has been traditionally used for animal feed and pet foods. However, white sorghum is increasingly used in gluten-free baking mixes, cereals and breads, as well as in wheat-based multigrain foods, because it has a mild flavor and is readily available at a reasonable cost. Sorghum cane syrup is a traditional sorghum based food. Sorghum can also be popped and eaten as a snack. As a whole grain, sorghum provides essential B-vitamins, minerals and fiber, as well as other phytonutrients.

Teff is a tiny, naturally gluten free cereal grain that originated in Ethiopia where it is still an important part of the diet today. Teff is used to make injera, a traditional Ethiopian flat bread that is reminiscent of a large pancake. Teff is most commonly available in brown or ivory seed color and has a mild, slightly sweet flavor. Teff can be found today in some foods in the supermarket that feature ancient grains or multigrain blends, including tortillas, pizza, crackers and pasta, as well as in some gluten free products. Like other grains, teff provides several nutrients, including fiber and B-vitamins. Compared to the other cereal grains, it has a higher overall mineral content and is particularly noted for its iron and calcium contents.

A staple of the Mayans and the Aztecs, this pseudo- grain has been grown for thousands of years. The kernels are tiny—about 4,000 per teaspoon—but their nutritional impact is big. Amaranth not only contains high quality protein, but also has higher levels of iron, phosphorous, magnesium and folic acid than most other grains. It is also gluten-free. Amaranth has a pleasant, nut-like flavor and toasting before grinding adds to the flavor. The seeds may be used in bread recipes to add texture and flavor, or can be popped like corn. Amaranth flour has no gluten for baking purposes, so you will have to mix amaranth with other flours. The ratio would be 1:3 (¼ cup amaranth, ¾ cup wheat flour = 1 cup)

A sacred staple of the ancient Incan empire, quinoa is a nutritional powerhouse, providing high quality protein and comparatively higher amounts of some nutrients, including potassium, folic acid, and vitamin E.
Quinoa has a distinct taste profile, with mild corn and bean flavor notes,and can be added to pilafs, stews, salads or bread. It can be found in the specialty section of supermarkets,gourmet food shops and health food stores. Because it is the fruit of an herb, quinoa is not a true grain and does not contain gluten. Quinoa originated from the Andes of Bolivia and Peru and most of the quinoa consumed in the U.S. is still imported from South America. It has the whitest color and the sweetest taste if grown above 12,500 feet.

Buckwheat has nourished man since the eighth millennium BC. Buckwheat is used in much the same manner as grains and has many characteristics of a grain. Although its name implies that it is related to wheat, it is a broadleaf crop in the same family as rhubarb and sorrel. Its seed is triangular in shape and has a dark hull which is usually removed, before milling the groat inside. The groat and flour made from the entire groat are considered whole grain. Dark buckwheat flour includes the hulls. Buckwheat is used to make everything from pancakes to soba noodles. Buckwheat flour is often mixed with wheat flour to make bread and pancakes with its distinctive nutty flavor. Buckwheat is a nutritional powerhouse and has higher quality protein, as well as higher levels of several nutrients, including magnesium and potassium. Our sincere thanks to Elizabeth Arndt, PhD, who helped write this hand-out.