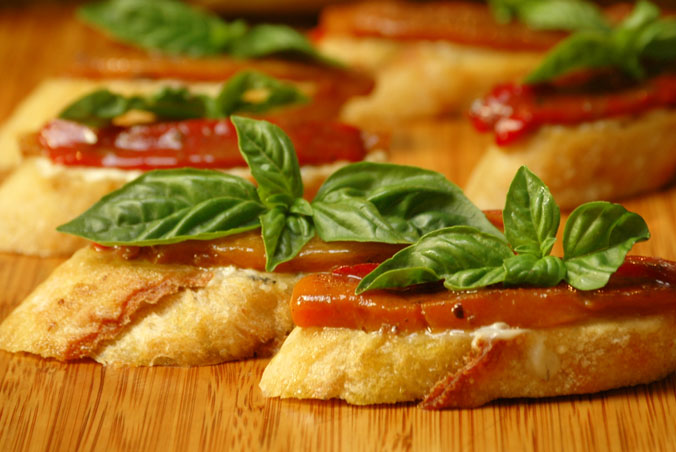 Toast a baguette, top it with the tang of French goat cheese and the sweetness of bell peppers marinated in balsamic vinegar for a perfect hors d’oeuvre.

Cut bell peppers in half lengthwise. Discard seeds and membranes. Place pepper halves cut sides down, on an aluminum foil-lined baking sheet, flattening peppers with the palm of your hand. Broil 10 minutes or until peppers are blackened. Remove pan from oven and wrap peppers in aluminum foil. Let stand 10 minutes. Peel.

Remove stems and cut the bell pepper into quarters. Remove and discard peels and seeds. Slice peppers into 1/2” wide slices and transfer to a medium bowl.

Brush both sides with olive oil and bake at 350˚F for 5 minutes, just until edges are crisp and centers are still soft. Remove from oven and cool to room temperature.

Spread a thin layer of goat cheese over the top of toasts then divide the marinated roasted peppers evenly between 25 toasts and garnish with fresh basil.